As a brand new yogi, I was drawn by the alluring dance-like movements my teachers guided us through in class. These asanas–they intrigued me. I became stronger, more flexible, and experienced a mental clarity I had trouble harnessing before. All thanks to my weekly yoga practice at the local studio.

I knew yoga originated in India, but I didn’t give it much thought. I assumed the practice I was engaging in was similar to the one the ancient yogis had done years ago. Why would we call it yoga otherwise?

Clearly the yogis of old had this whole physical aspect of personal refinement figured out. They were fit (or at least very trim) and their minds were clear. To me, the origins and history of yoga didn’t really matter. I enjoyed the often amusing imagery and stories about Hindu gods that accompanied many of the poses, but ultimately, I just enjoyed the results.

The longer I practiced, the more I started to wonder about the little tidbits of information and history I received in class: What were all these other practices and techniques, like purifications, Niyamas and Yamas, breathwork, and daily rituals? Why did my teachers often share Buddhist or Taoist quotes in a supposedly Hindu practice?  Who was Patanjali? And why are there so many different styles of yoga?

On top of that, why did some teachers not mention any of these ‘yogic tidbits’, and merely say “namaste” after a fairly intense workout?

Something about my understanding of yoga wasn’t quite right. Amidst my improving flexibility there were too many missing pieces. So, I enrolled to become a yoga teacher.

That marked the beginning of a process that gradually taught me much of the history of yoga. Years of teacher trainings and studies of traditional Indian art, and more recently, research by James Mallinson and Mark Singleton, along with the collective discussion around appropriation in the yoga world, helped me to connect the dots between the origins of yoga and how it has changed over the years.

The truth is the form of popular yoga that much of the world engages in today (even in India) is considerably different from the historical or original practices of yoga.

This article is a condensed version of what I’ve learned over the years about those ‘yogic tidbits’ regarding the origins of yoga and how it has changed. 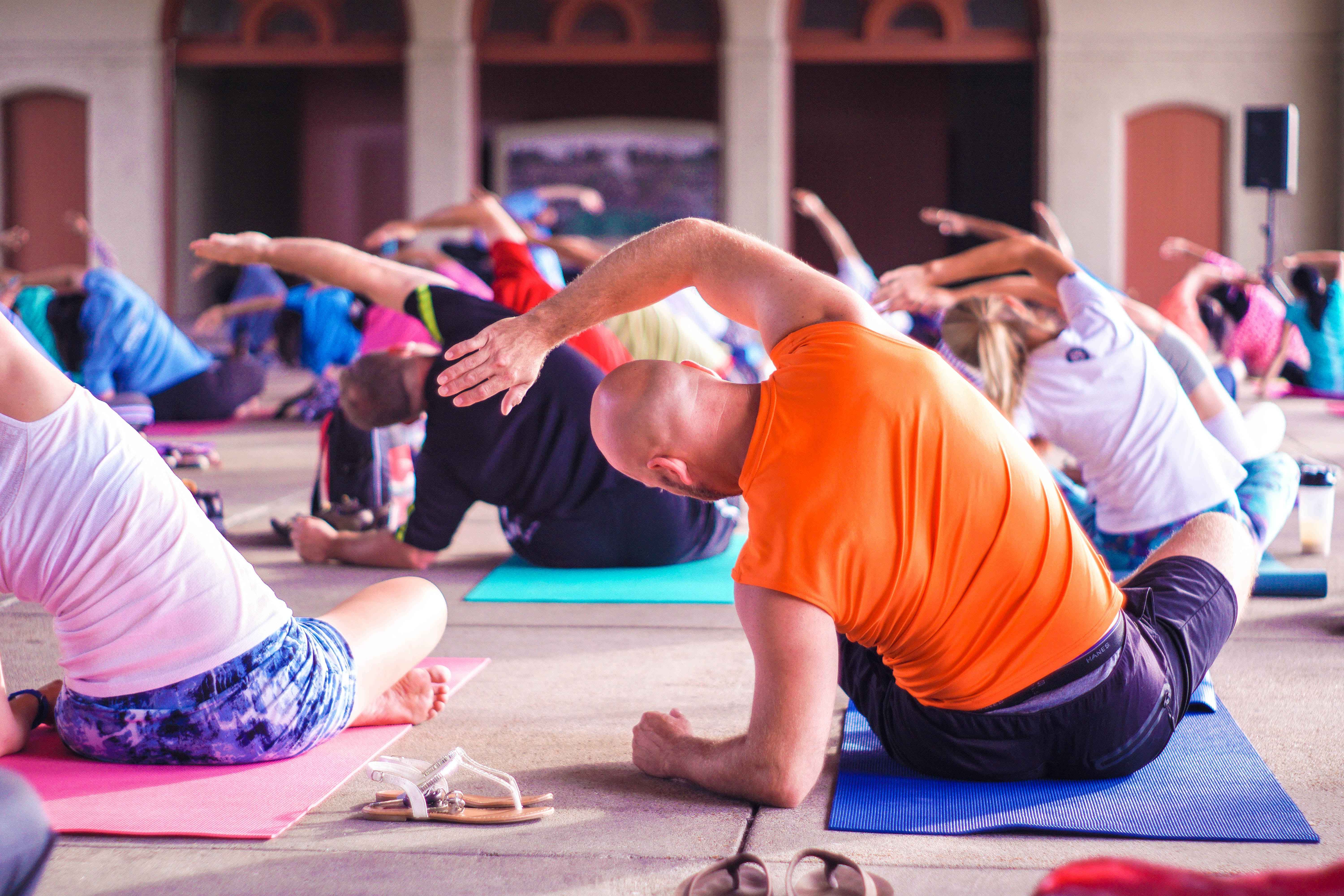 Where and when did yoga originate?

The short answer: In India about five to ten thousand years ago, depending on who you talk to.

Because the stories and teachings of yoga were shared orally or written on palm fronds that could easily decompose, determining the exact date (and location!) is virtually impossible. What we have identified, though, presents itself in the Rig Veda – part of a series of ancient sacred Hindu texts called Vedas from Northern India about 5,000 years ago. Here, the term ‘yoga’ emerged in its first documented form.

In yogic lore, Shiva is the first Yogi and Guru, predating any religion or belief system. He poured his profound knowledge of yoga into seven sages who dispersed and shared this knowledge around the world.

Interestingly, similar asana practices and yogic science emerged around the world, perhaps explaining why Buddhists, Jains, Muslims and even atheists lay claim to certain yoga techniques. As ideas, languages, and cultures go, many different groups were exploring similar concepts at the same time. When they crossed paths, knowledge was shared and expanded upon.

This explains why sometimes different religious concepts have made their way into our popular yoga classes, and why I was so confused to hear the Buddha quoted by my teacher during savasana.

Nevertheless, yoga solidly found its seat in India and Hinduism, where it developed into its fullest expression.

Yoga was slowly refined and developed by the Brahmans and Rishis (mystic seers) who documented their practices and beliefs in the upanishads, a huge work containing over 200 scriptures. The upanishads emphasized the dismantling of the ego by focusing on self-study, karma yoga (action) and jnana yoga (wisdom).  Around 500 BCE, one of the most renowned yogic scriptures was written: The Baghavad Gita. The lessons in this scripture about human existence and grappling with desires, doubt, purpose, and duty are still widely studied and shared today.

Later, during the ‘Classical Period,’ a yogi and scholar named Patanjali wrote a collection of Sanskrit sutras (teachings) on the theory and practice of yoga. This collection is the first systematic presentation of yoga we have to date. Patanjali organized the practice of yoga into an "eight limbed path" containing the steps and stages toward obtaining Samadhi or enlightenment. He is often considered the ‘father of yoga’ and his Yoga-Sûtras still influence most styles of modern yoga.

So, what did the teachings and practice of yoga look like back then?

When yoga first began, and for thousands of years afterward, its focus was on the subtle rather than grand gestures or asana (yoga poses). As such, traditional yoga is a body of knowledge, passed on from elders and gurus to disciples and the average person. It was (and still is for those who practice this way) an art and science of healthy living; its purpose is to bring harmony to the mind and body–and by extension, the community and entire universe.

This harmony was accomplished through observances and practices such as meditation, self-study, scripture learning, moral codes, breathwork, and daily rituals. Yoga addressed body, mind, emotion, and energy and had very little to do with the ‘asana’ practice we generally associate with popular yoga today.

During this time there was indeed a small postural component to the practice of yoga, but it was such a small limb of the teachings that most gurus did not emphasize it. Often the more physical postures/asana were only performed by those who were not highly regarded and low in the caste system.

What a far cry from today’s asana-heavy practice of yoga! 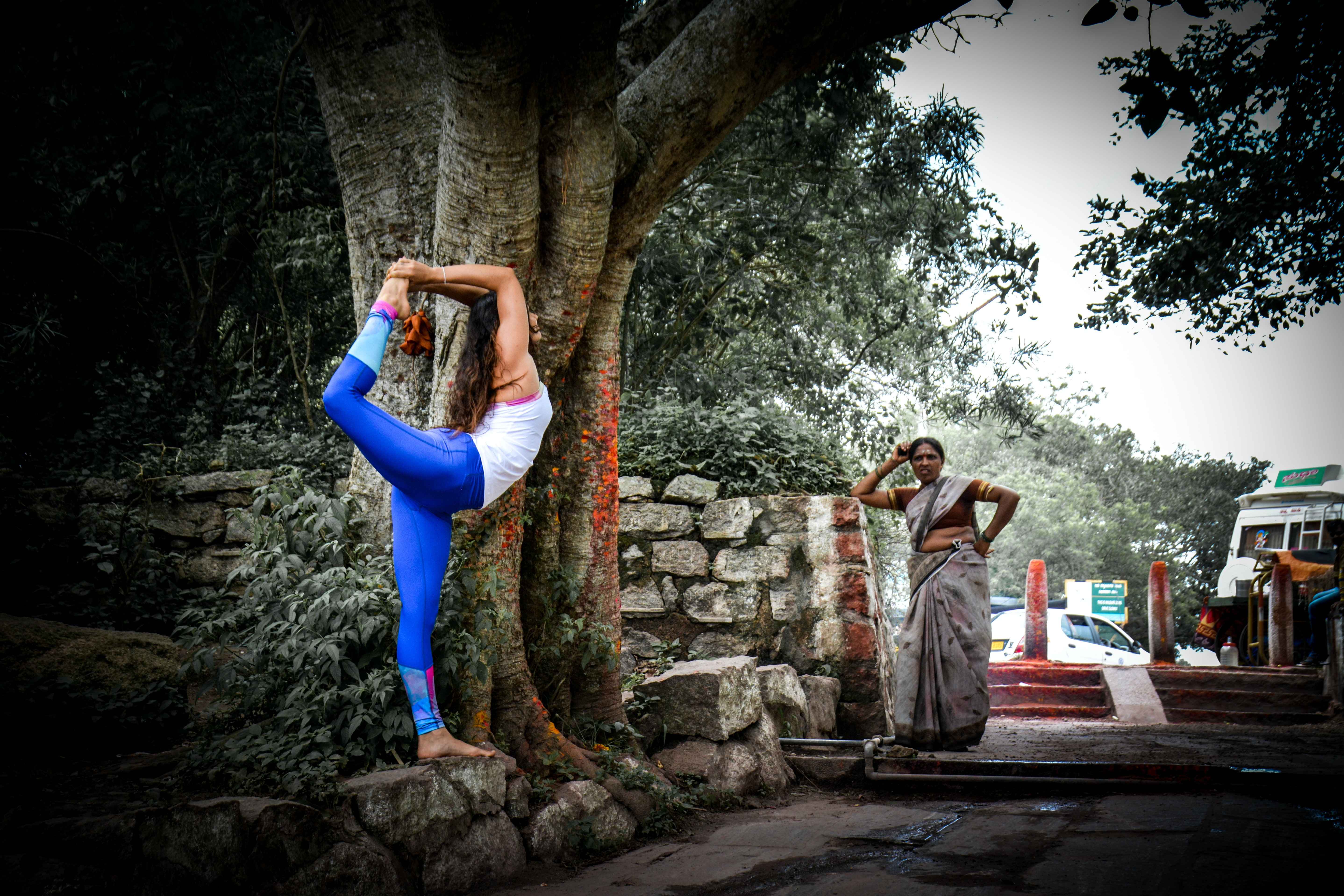 How and when did yoga start to change into the practice we know today?

It wasn’t until thousands of years after the Rig Veda and then Patanjali’s Yogic Sutras that yoga began to morph into a more physical practice and make its way into the West. ‘Hatha Yoga’ emerged from various sources at this time, and by the 1893 Chicago World Fair, Swami Vivekananda’s lectures sparked a desire for knowledge of Yogic Philosophy in North America.

With the influence of popular gymnastics and physical routines spreading from Europe and North America around this time, the practice of yoga began to incorporate more physical movements. The importance of physical ‘fit-ness’ began to rise and gain popularity amongst teachers in India.

In 1918, an Indian guru named Shri Yogendra founded what is now the oldest organized yoga center in the world: The Yoga Institute of Mumbai. He is often called the “Father of the Modern Yoga Renaissance” and taught asana based yoga. Notably, his life partner, Sita Devi Yogendra “Mother” was instrumental in encouraging women of their community to do yoga–a practice that had previously been dominated by men.

Several of his students proved to be direct influencers of the modern yogic movement: B.K.S. Iyengar, T.K.V. Desikachar, Indra Devi and Pattabhi Jois. A plethora of yoga schools focusing on Hatha Yoga and the more gymnastic/physical forms of yoga thrived in both India and North America from this point on.

Indra Devi, one of the first female teachers in the West, opened her influential yoga studio in Hollywood in 1947. Simultaneously, B.K.S. Iyengar spread his physical teachings of yoga around the world and gave inspiring demonstrations of his extreme flexibility on TV and in person in the UK and USA.

In 2004, Time magazine named B.K.S. Iyengar one of the 100 most influential people in the world, perhaps a reflection of how the physical aspects of yoga have been so celebrated by the West during the modern age.

How is yoga different from before?

As alluded to above, the practice of yoga has evolved much since the creation of the Rig Veda and the Bhagavad Gita. People of all walks of life and all sexual orientations now practice and teach yoga, and the practice itself has become much more physical than before.

When observing the practice of yoga as a whole, one can succinctly sum the differences up in a sentence by teacher Prasad Rangnekar: “Originally yoga was a body of knowledge. Today, yoga is knowledge of body.”

In other words, the yoga practice currently taught at most popular, mainstream yoga studios is heavily asana- based with more relation to gymnastics and movement therapy than the medieval and traditional yogic practices. To say however, that in today’s world the entire yogic process of self-refinement and community care has been popularly reduced to merely physical practice is not entirely fair.

Like the beauty and diversity of human existence, so are the teachings of yoga teachers around the world. When you attend different yoga classes, you will find that some teachers spend much time emphasizing the importance of traditional yogic philosophy, and how to incorporate it into your life. Occasionally you’ll find a teacher truly rooted in the traditional teachings of yoga, as they were taught in Patanjali’s sutras and beyond.

On the other hand, you’ll probably find more classes titled ‘yoga’ in which the teacher mentions not a single philosophy but guides you through a series of poses and physical movements to strengthen and stretch your body, ending simply with ‘namaste’. The range is wide! But refusing to recognize yoga’s true roots also steps into the tender arena of cultural appropriation.

Mark Singleton, a researcher and philosopher on yoga, suggests another way of looking at the relation between traditional forms of yoga and today’s gymnastics-like-yoga: as homonyms instead of identifying as the same practice–which they are clearly not. I like this view, although it is certainly still confusing. Past and present descriptions use the same name: yoga! How are we to know which is which?

Ultimately, yoga has been shifting and changing since its inception, as we all do. Gurus, yogis, scholars, and the everyday person now have varying ideas of what yoga means or identifies as and have over the course of its existence. This debate, and unsureness is nothing new. 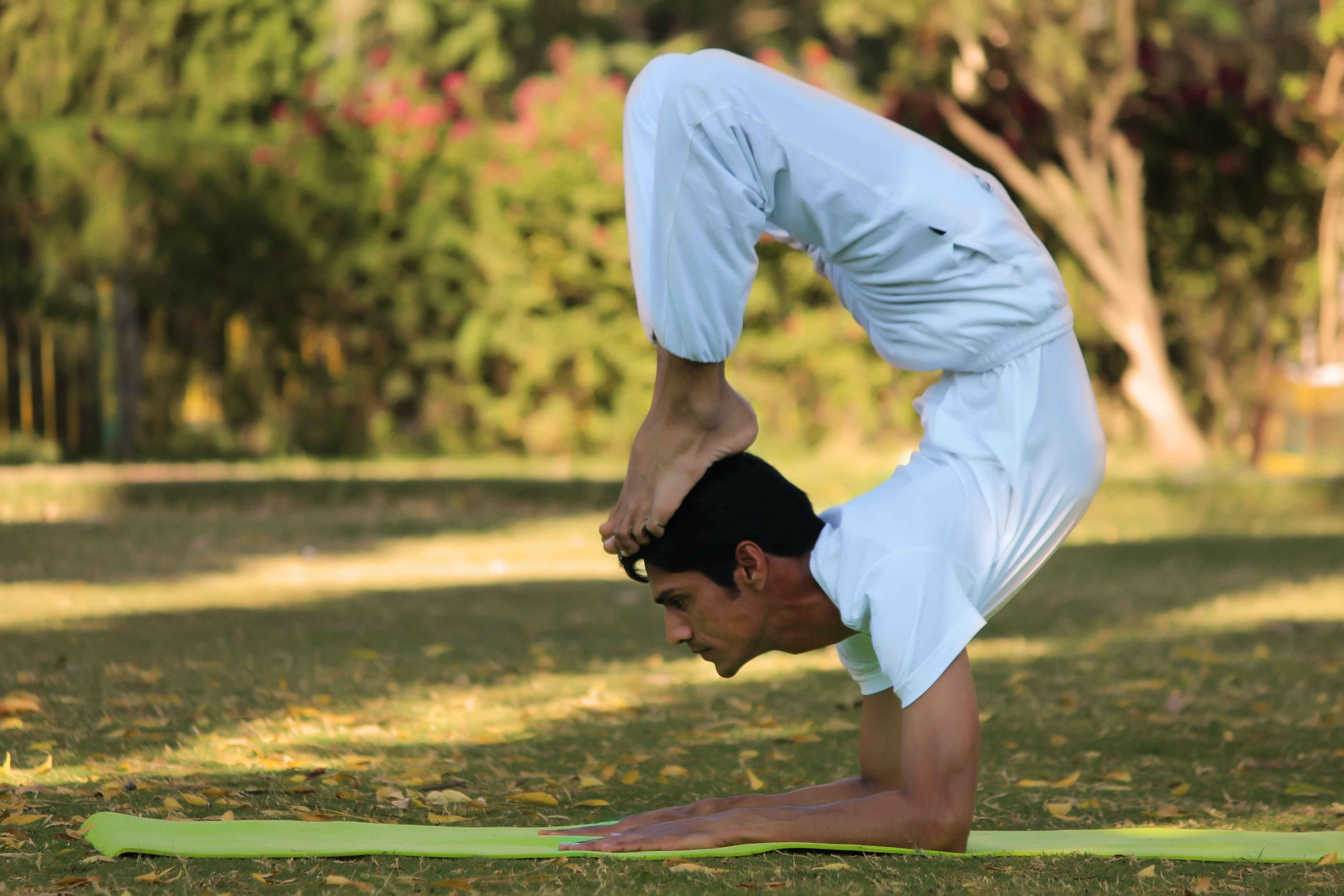 So, am I actually practicing yoga? (Cue existential crisis!)

I believe that as responsible practitioners (and teachers) we need to truly consider what exactly we’re striving for when we practice yoga. To count the modern, popular asana focused style of yoga as lesser than the traditional practices doesn’t allow for the space and value in yoga’s immense history that this modern style holds.

Awareness of the extent and broadness of yogic history and practice gives us the power to search out teachers and texts to help us learn further about the depth of teachings of yogic philosophy. Asana practice may serve you for many seasons of your life, but if you find that you are wanting more, if you’re ready for the hard, self-study and devotion that comes with other aspects of a traditional yoga practice, you can search them out too.

From 5000 years ago to now, the human condition, the tendency toward suffering, insecurities and pain has not changed much. The traditional forms of yoga are just as well suited to help ease this kind of suffering as ever–so if you haven’t tried them yet, now might be the time!

I wish you all the best on your yogic journey and hope that this article has provided some clarity around the origins of yoga and how it has changed over the years. If you have any questions or would like to add, please comment below!

And now, I’ll leave you with a quote from the Government of India regarding yoga’s transformation:

“Yoga Sadhana of all hues and colors is considered panacea for a meaningful life and living. Its orientation to a comprehensive health, both individual and social, makes it a worthy practice for the people of all religions, races and nationalities... Yoga is blossoming, and growing more vibrant every day.” 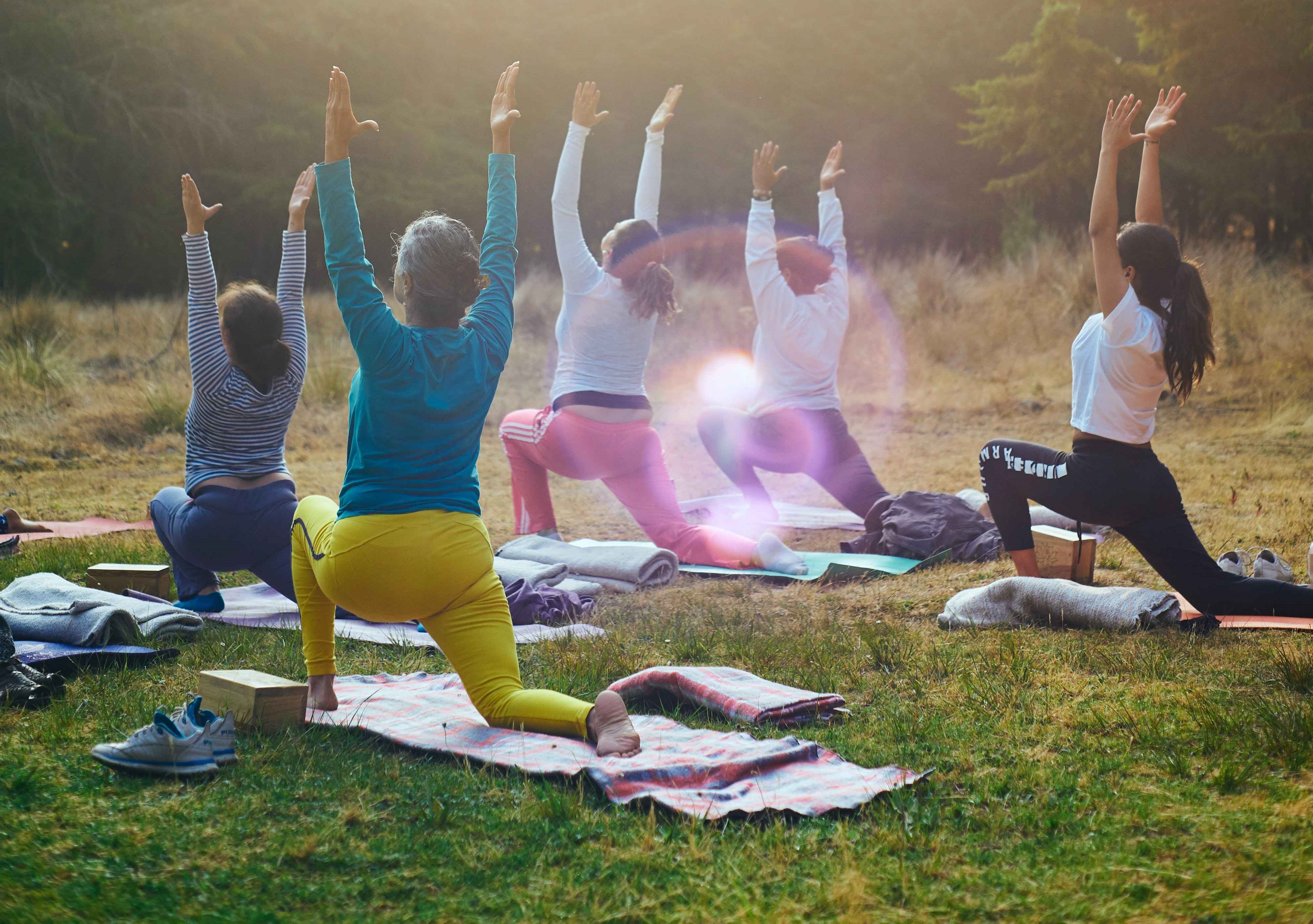